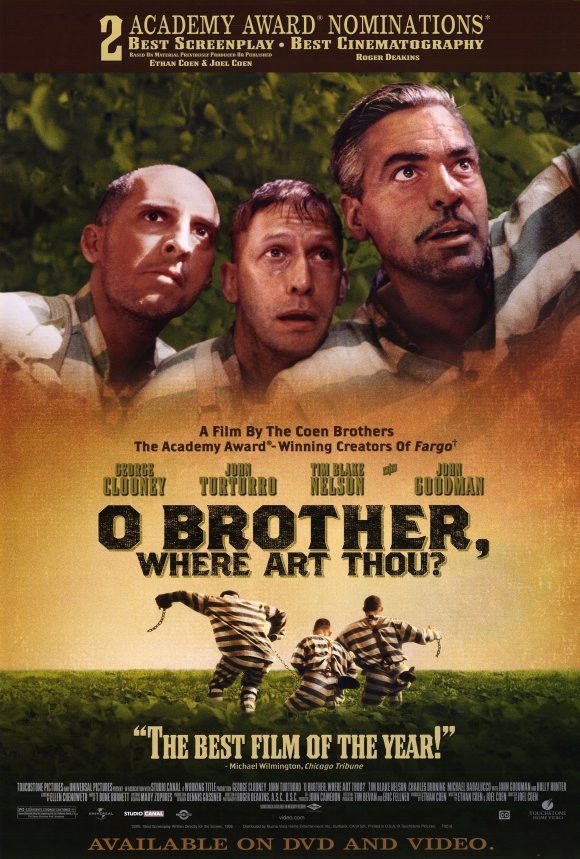 O Brother, Where Art Thou?

The film is set in 1937 rural Mississippi during the Great Depression. Its story is a modern satire loosely based on Homer’s epic Greek poem The Odyssey that incorporates social features of the American South. The title of the film is a reference to the Preston Sturges 1941 film Sullivan’s Travels, in which the protagonist is a director who wants to film O Brother, Where Art Thou?, a fictitious book about the Great Depression.

Much of the music used in the film is period folk music. The movie was one of the first to extensively use digital color correction to give the film an autumnal, sepia-tinted look. Released by Buena Vista Pictures (through Touchstone Pictures) in North America, France, Germany, Italy, and Spain and by Universal Pictures in other countries, the film met with a positive critical reception, and the soundtrack won a Grammy Award for Album of the Year in 2002, making it the only motion picture soundtrack to have ever received the accolade. The country and folk musicians who were dubbed into the film included John Hartford, Alison Krauss, Dan Tyminski, Emmylou Harris, Gillian Welch, Ralph Stanley, Chris Sharp, Patty Loveless, and others. They joined to perform the music from the film in a Down from the Mountain concert tour which was filmed for consumer consumption via TV and DVD. (Wikipedia)

Sign Up Here to Get Village Notices by Email

We will send you an email to confirm. You can opt out at any time, and we won’t send you any spam.

Got Something to be Included in Village Notices?

To request that something gets included in the Village Notices, email village.notices@littlegaddesden.org.uk.