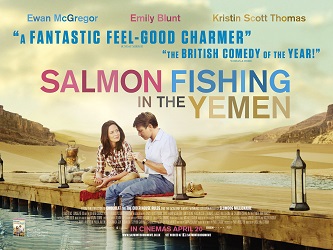 Salmon Fishing in the Yemen is a 2011 British romantic comedy-drama film directed by Lasse Hallström and starring Ewan McGregor, Emily Blunt, Kristin Scott Thomas and Amr Waked. Based on the 2007 novel of the same name by Paul Torday, and a screenplay by Simon Beaufoy, the film is about a fisheries expert who is recruited by a consultant to help realize a sheikh’s vision of bringing the sport of fly fishing to the Yemen desert, initiating an upstream journey of faith to make the impossible possible. The film was shot on location in London, England, Scotland, and Morocco from August to October 2010. The film premiered at the 2011 Toronto International Film Festival. The film received generally positive reviews upon its release, and earned $34,564,651 in revenue worldwide.

Sign Up Here to Get Village Notices by Email

We will send you an email to confirm. You can opt out at any time, and we won’t send you any spam.

Got Something to be Included in Village Notices?

To request that something gets included in the Village Notices, email village.notices@littlegaddesden.org.uk.